Do you need to decarboxylate cannabis flower for the cannabinoids to be active?

What is the carboxyl group on THCA and CBDA?

What temperatures and times are required to decarb cannabis flower?

Is the decarboxylation process necessary for all cannabinoids?

If you are asking these questions, you came to the right place with the right scientists!

What are acidic cannabinoids?

The natural state of cannabinoids are in the “acidic” form, and are what you would find in raw cannabis flower extracts, or purifications designed to only isolate the acidic cannabinoids. While most people have heard of THC and CBD, what many people dont know is that they come from THCA and CBDA (tetrahydrocannabinolic acid and cannabidiolic acid respectively).

Conventional processing to purify cannabinoids has relied on heat based distillation methods, which decarboxylate the compounds found in the extract. Thus, the benefits of acidic cannabinoids have only recently been discovered.

Scientists at Natural Dos have developed a new technology to isolate acidic cannabinoids from the raw cannabis flower extract to bring those benefits to the market.

The common structural motif of acidic cannabinoids is the presence of a carboxyl group (-COOH). This carboxyl group can be removed from the parent compound when the acid cannabinoid is exposed to certain temperatures over an extended time.

For example, the structure of CBDA and its decarboxylated form CBD is shown below:

Additionally, here is the structure of THCA and its decarboxylated form THC below:

As you can see, there is significant similarities between the different structures, but each has their own physiological impacts.

Typical purification processes use short path distillation. This is a method where the raw form cannabis is heated under vacuum, and cannabinoids are boiled off into a collection flask in higher purity. The heat applied will decarboxylate the cannabinoids to produce the common THC and CBD we are familiar with.

This process involves a series of ramped temperatures, such that wanted and unwanted compounds are boiled off at different temperatures. These can be collected in one after the next. Here is an example of a common setup to purify the cannabinoids: 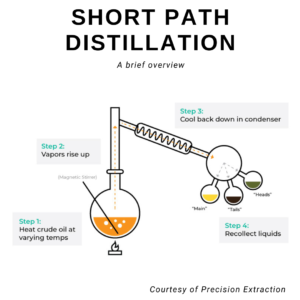 It is common to lose the terpenes in this process, so many companies will add terpenes back into their final product.

There are multiple ways to decarboxylate cannabis besides short path distillation. The more common way is smoking. Since THCA is what is found in the marijuana flower, why does smoking cause you to get high? The heat from burning the flower instantly decarboxylates the THCA into THC, thus creating the euphoric feeling people associate with marijuana.

For THC, the psychoactive effects are only gained after decarboxylation of THCA.

Since 2018 Farm Bill made hemp legal, hemp flower for smoking has become popular. While some people enjoy this for the recreational purposes, it is not clear that there is a medicinal benefit for CBD administered in this fashion.

New research is suggesting that many of the benefits from CBD are found in CBDA. Risking side effects of smoking organic material may not be the best way to get the potential therapeutic benefits of CBD.

CBDA does not need to be decarboxylated to yield the therapeutic benefits of hemp.

A common question for people interested in the cannabis decarboxylation process is what temperature removes a carboxyl group and how much time does it take? You dont necessarily need high temperatures, but it is also dependent on time as well.

Whether you are making edibles, or just interested in the chemical reaction, we break down a published study on acidic cannabinoids that outlines the parameters for how decarboxylation can occur.

Note that the experiments used ground flower for testing.

In the graph below, the temperature was held constant at 90C, or 194F for 60 minutes. The graph shows the amount of decarboxylation of CBDA (blue circle) to CBD (red square) and THCA (green circle) to THC (purple square).

Same setup as above, but this time the temperature was held constant at 105C, or 221F for 60 minutes.

Same setup as above, this time the temperature was held constant at 120C, or 248F for 60 minutes.

Looking at these different charts, its clear that the temperature and time you expose the raw cannabis flower to will determine how much decarboxylation occurs. Ranging from 200F to 250F for 30 minutes to an hour appears to be the best approach.

What are some of the best methods if you are interested in decarbing cannabis to make edibles?

Can too much heating destroy your THC and CBD?

The short answer is yes.

With too much heating for a longer period of time, you can convert the THC and CBD to other forms, such as CBN, or cause it to vaporize out of solution. The conversion of THC to CBN tends to occur at higher temperatures above 390F (200C) if left there too long.

Terpenes provide a lot of health benefits, and many people try to keep them in the mix with their decarbed cannabis. Since terpenes are more fragile than THC and CBD, they can become oxidized quicker when exposed to heating and air.

Terpenes are also easily vaporized at higher temperatures. If you are interested in maintaining the terpene profile of the raw cannabis, it would be best to decarb cannabis at a lower temperature.

Can you decarb cannabis without adding heat?

If you have a cannabis infused product or tincture it can undergo a slow conversion. This can also happen with raw plant as well if left out. Decarboxylation can occur when it is exposed to sunlight over time. This process is slow, but decarboxylation occurs when the sunlight adds energy to the THCA and CBDA.

We recommend storing your cannabis in a mason jar or other container that is brown glass, or in a dark place.

How to calculate how much decarbed product you have

When determining amount of THC and CBD of your decarbed cannabis, you need to multiply by 0.88 to get the final product. This is because the acidic cannabinoids lose CO2 (carbon dioxide) when the get decarboxylated.

If you know the starting concentration, say 1000mg of CBDA, then the final amount of CBD should be around 880mg.

Do I need to decarb cannabis

Acidic cannabinoids, such as CBDA, have over 450% greater absorption than their decarbed forms, and are now being recognized for some of their amazing immune and anxiety benefits.

Cannabis decarboxylation can be a complicated topic, but if you follow these guidelines, you can get a great decarbed product. Be mindful of the heat, and make sure to break up the cannabis plant when are mixing.

Best of luck and have fun! 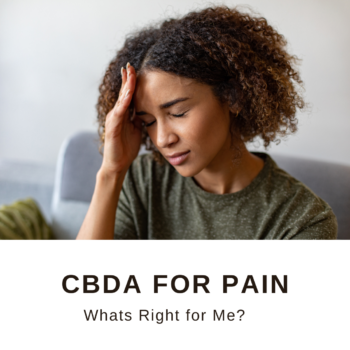 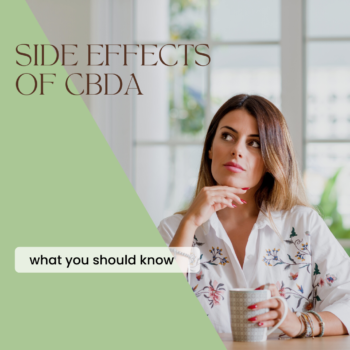