CBDA for inflammation the guide

CBDA for inflammation the guide

CBDA for Inflammation – The Guide to Unlocking the Potential of Hemp

Waking up with joint discomfort and pain is exhausting, and affects many aspects of your life, like outdoor activities, golf, and playing with your kids or grandkids.

Inflammation is often the driver of many diseases, the most commonly known may be arthritis, but it is also a critical player in cardiovascular diseases, neurodegenerative diseases, and multiple cancers.

While there are many anti inflammatory drugs on the market, they often have variable results and come with significant side effects.

What is CBDA and acidic cannabinoids?

Cannabis plants are fascinating, with so many different compounds produced, it seems to have an almost unlimited set of potential benefits. This may be why the cannabis plant has been found in various civilizations across the globe dating back thousands of year.

Why is the cannabis plant so powerful? The over 100 different acidic cannabinoids produced by the hemp and marijuana plant act on many different receptors of the endocannabinoid system, and many more.

CBDA (cannabidiolic acid), is the most abundantly produced acidic cannabinoid in the hemp plant. This is counter to the marijuana plant whose primary acidic cannabinoid is THCA (tetrahydrocannabinolic acid). While both plants are of the herbaceous species, cannabis sativa, they differ only legally based on the amount of “THCA” and “THC”.

How is CBDA produced?

All cannabinoids in the hemp plant are derived from the mother cannabinoids CBGA or CBGVA. In the case of CBGA, it is converted by enzymes THC synthase or CBD synthase into the THCA or CBDA, from which other downstream acidic cannabinoids are created.

Most hemp plants will have a very high CBDA concentration in its oil compared to other acidic cannabinoids like THCA, which are typically between 1-3% in abundance.

Structurally, the difference between CBDA (cannabidiolic acid) and CBD (cannabidiol) is the presence of a carboxylic acid. CBDA is often converted to CBD in a process called decarboxylation, which occurs at multiple steps during the creation of a purified cannabinoid oil;

See below for the chemical structure of CBDA and CBD:

One of the most unique properties of the naturally occurring acidic cannabinoids is the enhanced absorption. CBDA is better absorbed by 450-1000% than CBD! This finding is critical for understanding why CBDA and other acidic cannabinoids are the next evolution in hemp based therapeutic applications.

This enhanced absorption is also true for other acidic cannabinoids, such as cannabigerolic acid (CBGA), compared to their decarboxylated counterparts.

Because many CBD studies end up using very high amounts to achieve positive clinical outcomes, the implications for CBDA dosage are significant.

Research on CBDA and its anti inflammatory properties

While CBD oil has been widely studied due to its more ubiquitous presence in the market, CBDA has recently been gaining interest by many a research team in the cannabis space due to new data and purification technologies.

Cannabidiolic acid CBDA, among other acidic cannabinoids, has been shown to have significant effects on cannabinoid receptors, but also on other “non endocannabinoid system” associated enzymes.

Recent studies on potential benefits of CBDA to relieve inflammation were found to be associated with the pro-inflammatory enzyme COX 2 (cyclooxygenase 2). COX 2 is responsible for production of prostaglandins, such as prostaglandin E2, which drive inflammation in many pathologies. 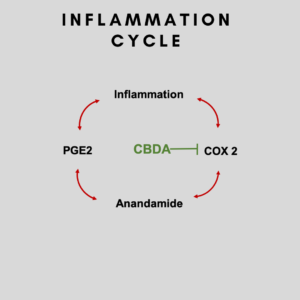 COX 2 is the critical target for nonsteroidal anti inflammatory drugs like aspirin and ibuprofen.

In a study using breast cancer cells, CBDA was found to directly inhibit COX 2 activity. This found that CBDA could inhibit 50% of COX 2 activity (IC50) at a concentration of 2.2 uM (or 789 ng/mL). Interestingly, CBDA has a 10-fold preference for COX 2 over COX 1 inhibition (20 uM vs 2.2 uM), which may be important since COX 1 is generally used more for physiological maintenance compared to COX 2 for more inflammatory actions.

Additionally, CBDA interacts with other non endocannabinoid receptors to decrease production of COX 2 specifically. This appears to be through the regulation of transcription factors c-fos and AP-1 (activator protein 1).

CBDA and the endocannabinoid anandamide

An additional benefit of CBDA inhibition of COX 2 is that it could increase the levels of the natural endocannabinoid anandamide. An early research team at Roche Bioscience found that COX 2 could convert anandamide to prostaglandin E2 ethanolamide, a pro-inflammatory lipid.

CBDA, by inhibiting COX 2, could be increasing endogenous levels of encannabinoids by stopping their conversion to pro-inflammatory lipids.

Anandamide has been widely studied for its anti inflammatory properties, and is one of two critical endocannabinoids that regulate the endocannabinoid system.

A recent study in bovines (cow) using the full hemp plant that did not convert CBDA to CBD found significant decreases in the the pro-inflammatory lipid prostaglandin E2. In addition, there were signifiant decreases in liver enzymes GGT (gamma glutamyltrasferase) and AST (aspartate transaminase). Elevated levels of these enzymes are commonly associated with liver inflammation and complications from drug overdose.

What was the amount of CBDA consumed to get these results? Converting the mg/kg dose to a 150lb (70kg) person, they ranged from around 350-400mg per day.

Other health benefits of CBDA oil

While CBDA has limited clinical trials, there are many preclinical studies that show promising therapeutic potential for a number of other conditions.

CBDA helps with nausea and vomiting

CBDA was found to activate the 5HT1A receptor, well known serotonin receptors, and was able to inhibit vomiting induced behaviors in a mouse and rat model of carrageenan induced hyperalgesia. These studies were also assessing nausea, and found that CBDA could decrease nausea and vomiting signs at the same time.

Many consumers of the raw form of hemp extract which contains high levels of acidic precursor cannabinoids (CBDA, CBGA, THCA etc), find significant relaxation effects. While this may be associated with how these cannabinoids treat inflammation, it is most likely through the serotonin receptors, like 5HT1A, that are located in the central nervous system.

More research is needed to better tease out the multifacted mechanisms that underly the potential health benefits of CBDA.

This is where acidic cannabinoids shine. Since they have over 450% better absorption, a 50mg dose of CBDA would be similar to a 250mg CBD dose. This makes full spectrum and broad spectrum CBDA oils very cost effective.

Animal models are often used as a starting point for determining the pharmacokinetics of chemical compounds. In the case of CBDA, we also have some published studies that assessed the uptake and blood levels for low doses of CBDA consumed after oral administration.

Using data from this CBDA and CBD pharmacokinetic study in humans, we can derive a relative amount needed to reach certain blood levels necessary for different therapeutic potential.

Possible side effects of CBDA oil and cannabinoids

There are limited studies on the side effects on CBD and its acidic precursor cannabinoids, however, animal and human studies show that there is little chance of overdose since that has yet to be observed.

Typically, at higher doses of CBDA or CBD products may result in a few of the following that have been reported by users:

It should be noted that in epileptic patients taking over high amounts of CBD per day, there was reported elevated liver enzymes in a minority of patients. This is thought to be through drug-drug interactions as these patients were also on other anti seizure medications.

If you plan on taking higher doses of CBDA or CBD, have a history of liver complications, or are on multiple medications, please consult with your health care provider before trying.

Where to buy the best CBDA oil

The best CBDA products will all have a third party testing company that provides a Certificate of Analysis (CoA) for each CBDA product. This should test for cannabinoid potency, and potential contaminants like heavy metals, pesticides, solvent, and microbials. If there is not one, do not buy.

If you do not know how to interpret testing results, see our CBDA CoA guide.

We may be biased but we recommend….

Natural Spectrum CBDA oil products from Natural Dos. All of our acidic cannabinoids are made in house, and all the final products are tested by an IOS 17025 certified third party laboratory.

Every CBDA oil product from Natural Dos is formulated for maximum CBDA, and comes with 180 day money back guarantee. 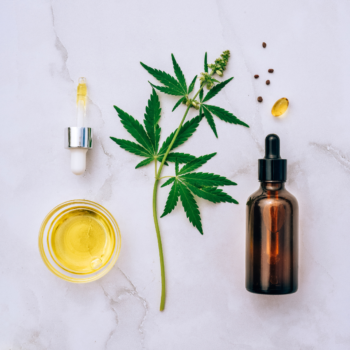 how long does cbda stay in your system 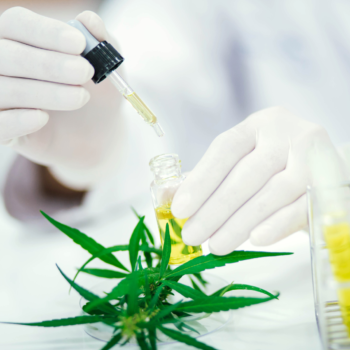