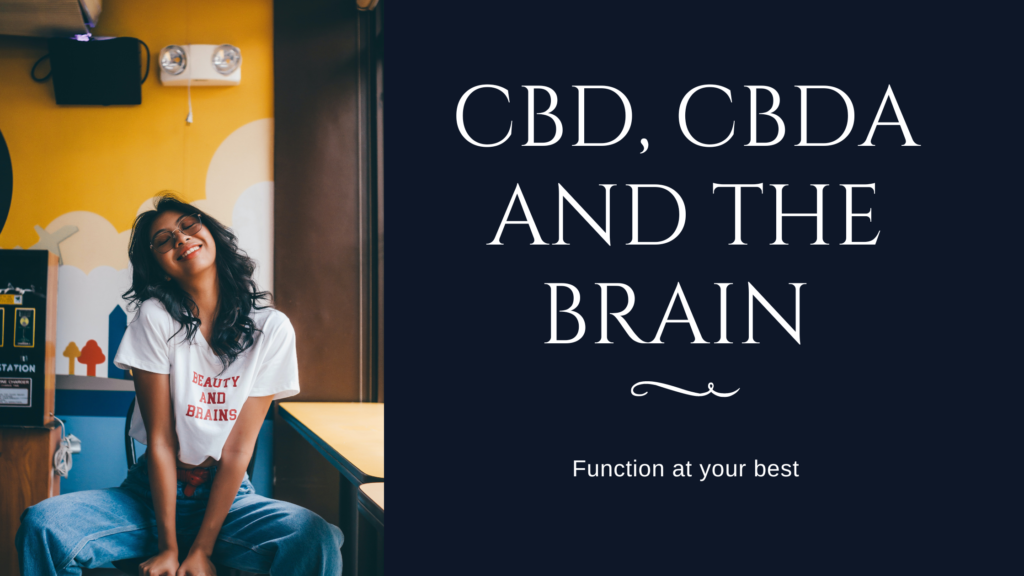 Role of CBD and Inflammation

What you will learn:

CBD vs CBDA for inflammation

What is brain inflammation?

Excessive inflammation is often associated with many common diseases, such as arthritis and cardiovascular disease, but when it comes to the brain, inflammation is associated with dementia, traumatic brain injury, autoimmune diseases, viral infection, stroke, and any event that leads to blood loss. The brain is a unique organ in that it is protected by the blood brain barrier, which means that potential inflammatory immune cells and compounds need to cross this barrier to reach the neurons. In general, the brain can experience an inflammatory state if 1) pro-inflammatory stimuli cross the barrier or, 2) there is a loss of blood flow to the brain leading neurons and glial cells to become actively pro-inflammatory. These states generally fall under the medical term Encephalitis.

Symptoms of Encephalitis, or brain inflammation, can take the form of a fever or headache, but when severe, can include confusion, seizure, and affect other sensory functions. Please contact your physician if you experience any of these.

What are CBD effects on the brain? Inflammation and receptors

There is significant focus on the endocannabinoid system (ECS) since the first targets of CBD and THC were the cannabinoid receptors 1 and 2 (CB1r/CB2r). The CB2r receptor can be activated by CBD since it can cross the blood brain barrier and exert its effects directly on the neurons. The effect of CBD on CB2 receptor in the brain is shown below: 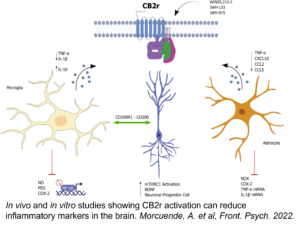 While this diagram pulled from a review article (cited in the legend) may be complicated, it highlights a few critical components on how CBD affects brain inflammation through CB2 receptors. Inflammation is typically propagated through cytokines which are cell signaling proteins secreted to cause pro-inflammatory responses in other cells. These can be decreased by CB2 receptor activation from cannabinoids like CBD. Additionally, CB2 receptors may activate a number of signaling proteins that help cells regenerate, such as BDNF (brain derived neurotropic factor).

Cannabinoid receptors, such as CB2 receptor, are not just found in the nervous system and brain, but are also found on the cell surface of some immune cells, such as B cells that are responsible for antibody production. This means that CBD and CBDA can affect inflammation by directly acting on the immune system.

CBD effects on the brain are also mediated through other receptors outside the endocannabinoid system. These include, 5HTa1 , which can associate with the CB2 receptor on the cell surface. This receptor can modulate serotonin activity in the brain, and is thought to be an additional mechanism through which CBD affects brain recovery systems.

What are CBD effects on the brain? Inflammation and the immune system

Often, an inflammatory stimulus outside the brain can affect the health and function of neurons. This has recently been highlighted in new studies showing that the lymphatic system, which helps transport immune cells around the body, reaches inside the meninges of the brain. 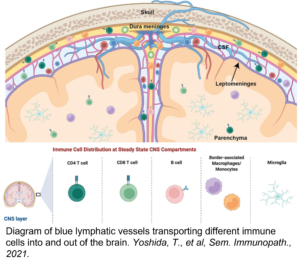 What are CBD effects on the brain? In vivo animal studies testing CBD and brain inflammation

A number of research findings found that CBD prevents brain inflammation in animal models replicating autoimmune and stroke induced brain inflammation. A common model for autoimmune brain inflammation is EAE (experimental autoimmune encephalomyelitis), useful for researchers to test the efficacy of different interventions in preventing damage and understanding the mechanisms of injury. CBD was shown to significantly reduce damage in EAE animal models through multiple mechanisms including activation of antioxidant elements, reduction in systemic inflammatory T cells, and induction of anti-inflammatory gut microbiome.

CBD reduces brain inflammation in animal models of stroke. Stroke damage occurs when blood stops flowing to a part of the brain, leading to oxygen and nutrient deprivation. In one model of stroke, CBD was found to prevent some neuron death, and motor function was improved after occlusion. Another publication reported that inflammation from brain ischemia, was reduced by CBD leading to less hippocampal cell death and improved motor function compared to untreated controls.

How much CBD is used to reduce brain inflammation?

The studies highlighted above used 5mg/kg and 10mg/kg respectively. How does this dose convert to average human weight? A 150lb person is 68kg on the metric scale, converting to the two doses above yields a CBD dose of 340mg and 680mg! This is almost half a bottle of a 1000mg CBD product and would be difficult to reach those therapeutic levels.

How does a dose of CBDA compare to CBD?

This publication found that taking unheated hemp extract high in CBDA yielded 4.6X more CBD in the blood than heated hemp extract with no CBDA (14.85 vs 3.02, AUC(0-24h)). This would imply that a 108mg dose of CBDA would provide similar benefits as a 500mg dose of CBD! Heat is the critical component in normal cannabinoid purification that converts CBDA to CBD, and is the reason you mostly find CBD instead of CBDA products. Check out our guide on Best CBDA Oil to Buy to find what is right for you.

There are fewer studies on the effects of CBDA in the brain compared to CBD, however, since CBDA appears to be converted to CBD inside the body we can make some assumptions that there are some cross benefits. Significantly lacking at this time are large scale clinical trials with CBD and CBDA, however, there are some ongoing clinical trials using CBD to treat inflammation and the brain. We have listed those below for those interested in following the results:

Cannabidiol for Reduction of Brain Neuroinflammation

Effects of Cannabidiol (CBD) on the Brain

Investigation of Cannabidiol for Reduction of NeuroInflammation in Chronic Back Pain

Let us know if you have any topics you would like to see articles on.

Can you get addicted to CBD? 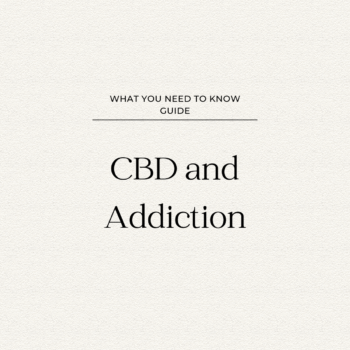