How CBDA works in the endocannabinoid system

The ECS is a potent integrated process throughout the body, and can influence a wide variety of symptoms and physiological functions.

There are many different communication systems in the body, and the endocannabinoid system is a significant player in regulating a large number of physiological properties.

How does the endocannabinoid system work?

The cells in our body communicate with each other by secreting a wide variety of proteins, metabolites, fats, and other small molecules. When the body is under stress, the signaling changes and elicits adaptive responses in many different cell types and organs. However, if the stress is chronic, it can cause long term changes in how the body communicates leading to cellular damage.

The endocannabinoid system signals through the secretion of two critical endocannabinoid compounds, arachidonoyl ethanolamide (anandamide; ANA) and  2-arachidonoyl glycerol (2-AG). While both of these lipids contain arachidonic acid, their endogenous synthesis is quite different. ANA can be produced in a number of pathways, the main occurring from phospho-anandamide interacting with the phosphatase PTPN22. Interestingly, the ANA endocannabinoid can be degraded by COX-2 (cyclooxygenase-2), a critical enzyme in the production of pro-inflammatory prostaglandins. COX-2 is a common drug target for NSAIDs (non-steroidal anti-inflammatory drugs) such as ibuprofen, and can also be inhibited by CBDA. This suggests that CBDA could increase endogenous endocannabinoid amounts, such as ANA, by preventing function and expression of the degradation enzymes.

The second endocannabinoid (2-AG) is typically synthesized from diaglycerol via hydrolysis from diaglycerol lipase. While 2-AG can be degraded by COX-2 as well, this is not the primary mechanism by which cells modulate the concentration and release of this lipid.

The mechanisms by which endocannabinoids exert their action are many, and include PPAR-gamma, TRP channels, and most notably cannabinoid receptors 1 (CB1) and 2 (CB2). These two receptors are found in most cells throughout the body, and elicit different physiological changes in the receptor cell depending on the cell type.

Both endocannabinoid receptors, CB1 and CB2, are expressed differently across the body, with some cells having more of one than the other.

CB2 receptor: primarily found in immune cells such as lymphocytes. 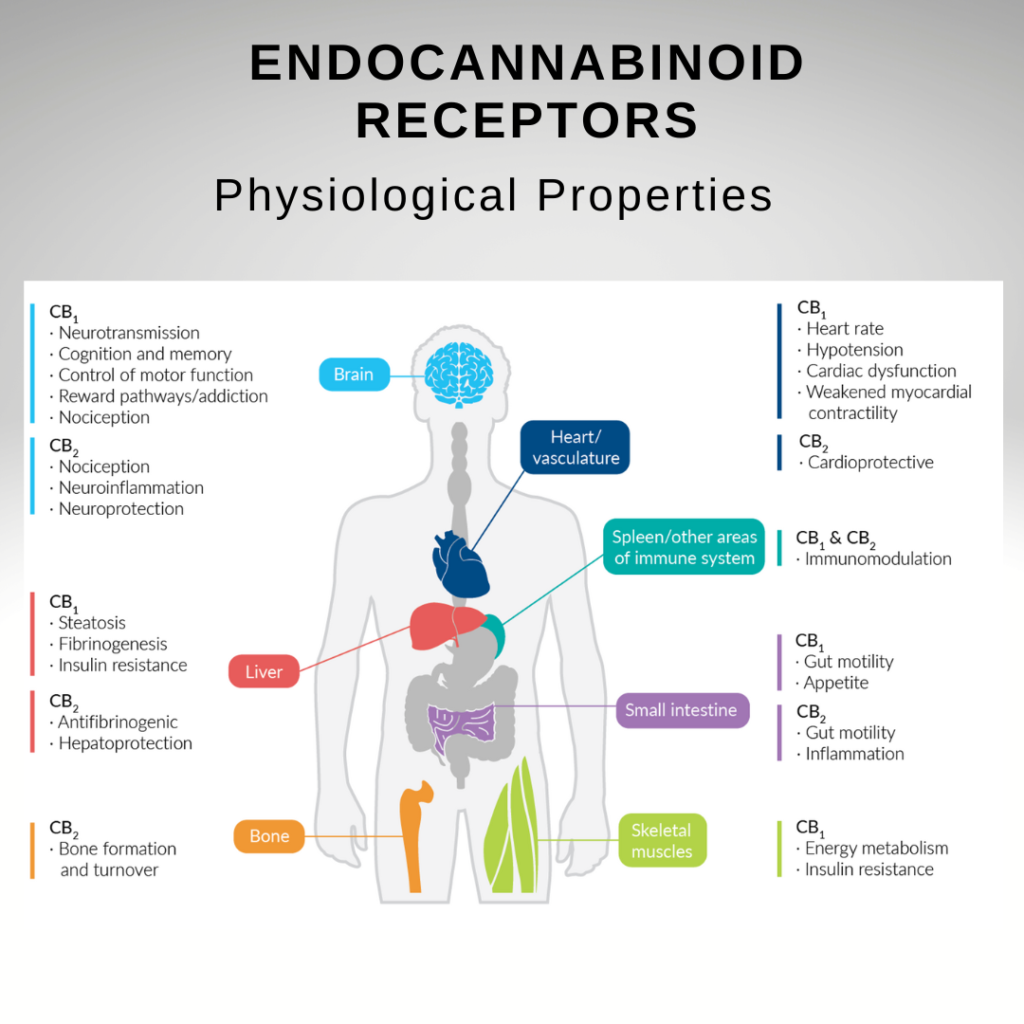 A recent study by Dr. Rafael Franco from the University of Barcelona in Spain found that CBDA increased the expression of CB2 receptors. They used an in vitro model of CB2 transgenic expression, and tested the ability of multiple cannabinoids to elicit changes in CB2 receptor expression. While more in vivo studies are needed to determine this mechanism across multiple cell types, it suggests a positive feedback mechanisms unique to this acidic cannabinoid.

As seen from the distribution above, the endocannabinoid system plays an important role in many of the tissues and processes they control. This means that dysregulation of the ECS can cause significant problems with many different physiological manifestations.

In addition to the CB1 and CB2 receptors that endocannabinoids, CBDA and other cannabinoids can activate, the 5HT1A receptor is also a target of these class of cannabinoids. This serotonin receptor found in most neuron cells has been implicated in mediating a wide range of physiological states and moods associated with anxiety and depression. In fact, this is one of the primary targets for the SSRI (selective serotonin reuptake inhibitors) class of pharmaceuticals.

The 5HT1A receptor has been widely studied as a target for CBD, and recent studies are showing that CBDA can also modulate this same receptor. In vivo and in vitro studies on CBDA activation of 5HT1A found that it can decrease nausea through direct activation of this receptor.

TRPV1/2 (transient receptor potential cation channel subfamily V member 1/2) are a class of ion channel proteins involved in sensory perception in neurons. Activation of these proteins from heat, capsaicin (the heat compound found in spicy chilies), and some cannabinoids cause cations to flow into the cell leading to cellular signaling and transmission.

CBDA and other cannabinoids have been studied for their ability to modulate TRPV1/2 class of receptors. This body of studies suggests that some of the pain reduction found in a number of studies may be derived from cannabinoids ability to affect these class of cell surface protein channels.

Peroxisome proliferator-activated receptor-g, (PPARg) is a critical node in controlling many metabolic and inflammatory responses to cellular stimuli. This nuclear receptor is a primary target for common type 2 diabetic drugs, such as rosiglitazone, that increase insulin sensitivity in patients with chronic high blood glucose levels.

Cannabinoids and endocannabinoids have been found to activate PPARg, and show a remarkable ability to decrease inflammation and free radical production through this pathway. This neuroscience study by Dr. Luca Steardo at the University of Rome found that CBD could decrease secretion of inflammatory cytokines, dampen pro-inflammatory signaling processes, and prevent significant production of free radical damage markers in a model of Alzheimers disease. These effects of CBD were shown to be from its ability to activate PPARg, since the effects were reversed if the cells or animals were first treated with a PPARg inhibitor.

How does CBDA interact with the endocannabinoid system?

As mentioned above CBDA can interact with cannabinoid receptors, but recent studies indicate that the CB1 and CB2 receptors form dimer complexes and on the cell surface and only CBDA was able to elicit a marked increase in its formation. Interestingly, this same study found that CBDA was just as potent in activating the downstream inhibition of cAMP through the CB1 receptor as THC, and more potent than CBD. However, THC and CBGV were the most potent in activating ERK signaling, suggesting a multi-faceted CB1 receptor activation process that is different depending on the specific kind of cannabinoid that is present. This makes sense since THC can elicit a euphoric response and CBDA cannot, suggesting there must be differences in intracellular responses to cannabinoid receptor binding.

Pathobiology, or the mechanisms by which a disease develops and evolves, tend to be complex and vary over time, but there are often common overlapping themes at a molecular level that can be extrapolated for benefit. How, why, and when do endocannabinoid systems go awry, and what are the problems this may cause? These questions are typically answered by looking for changes in the amount of endocannabinoids, such as ANA or 2-AG, in living donor or in a model and comparing to a healthy control.

An Italian study that assessed the cerebral spinal fluid of patients with chronic migraines found that they had significantly less, almost half the concentration, of the endocannabinoid ANA than the healthy control arm with no migraine symptoms. While further studies would be needed to show a causation between endocannabinoid deficiency and migraines, other researchers have found that medical cannabis is a potent therapeutic for treating migraines.

The endocannabinoid system is starting to receive more attention in the biomedical research fields, but the overall understanding of its role in pathobiology of many diseases is still poorly understood.

Currently, published research has connected the endocannabinoid system to a number of physiological process that include:

The future of cannabinoids is bright, and the understanding of how they can benefit the endocannabinoid system for positive health benefits remains a compelling area of research. The mechanisms of how endocannabinoids work in the body is complex, and relies on many receptors and targets outside just the CB1 and CB2 receptors. The interplay of various cannabinoids and the array of cellular targets will continue to be an intriguing field and will yield great opportunities to fine tune the potential medicinal properties of these compounds.

Let us know if you would like us to research any specific topics in this area. Hope you enjoyed!

CBDA Dose: What Should I Know? 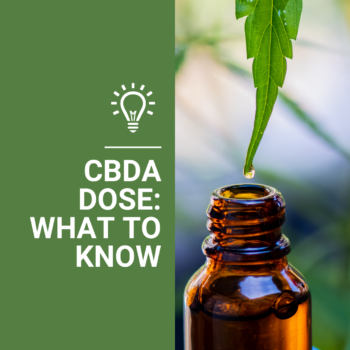 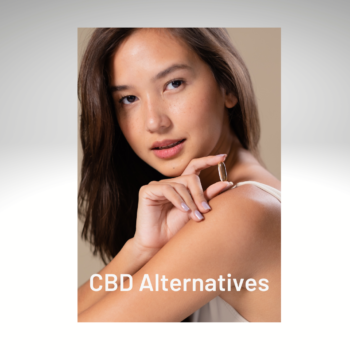