A night of drinking with friends can be fun, but for many people the next morning may be rough as unpleasant hangover symptoms set in. Hangovers from alcohol withdrawal are typically associated with headaches, fatigue, and nausea. People are now also appreciating that often there can be high levels of anxiety (increased anxiety in 12%) since additional psychological stress is strongly associated with alcohol use. This hangover related anxiety is now being termed “hangxiety”, but what can you do to treat hangxiety?

Don’t waste the rest of the day anxious and alone in bed, relax and enjoy the moment with all new Natural Spectrum CBDA & Delta 8 gummies.

Most people have seen the painful headaches, nausea, and sometimes vomiting that come along with hangover symptoms, if not experienced it themselves. The same physiological stress that gives rise to common hangovers, also lead to hangxiety. Some signs of hangxiety include: 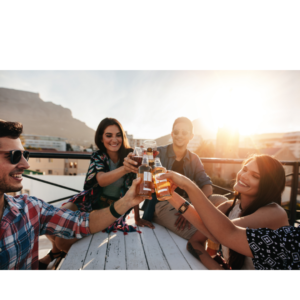 The term hangxiety only recently became popular to describe hangover related anxiety, and does not have any technical definition. Anxiety or hangover anxiety is dreadful, and painful feelings of distress which can sometimes arise from drinking are not uncommon. This affects your mood alongside physical hangover symptoms and is debilitating in some individuals. The hangover is essentially a recovery period for both the body and brain, and anxiety that is brought along with a hangover affects mental health.

Hangover anxiety is not a well studied phenomena, but is widely reported by people who drink alcohol in excess. While hangovers affect people differently, there are common themes for hangxiety:

Often people with social anxiety use alcohol as a way to inhibit anxious thoughts and be more outgoing. After a night of drinking alcohol, these same anxieties can return and are often amplified by the physiological stress brought on by the drinking behaviors.

Alcohol can affect neurotransmitters in the brain, and specifically GABA which has a calming property in the brain. Alcohol is known to mimic some of the effects of GABA activity, leading to a relaxing feeling after 1 or more drinks. A secondary effect of alcohol is that it inhibits glutamate activity, which is an excitatory neurotransmitter. As ethanol is removed from the system during alcohol detox, the inhibitory activity on glutamate decreases and activity is reestablished, potentially leading to racing thoughts and feelings of anxiety.

Increased levels of stress hormones from alcohol use disorder are often associated with hangovers. There is a growing body of research showing alcohol can affect the hypothalamic pituitary adrenal axis, leading to changes in stress glucocorticoid stress hormones. These endogenous hormones have been linked to elevated levels of anxiety and stress in generalized anxiety disorders.

Anyone who drinks knows that the body needs clears alcohol from the system through the urine. Drinking alcohol in excess leads to excess urination, depleting the body of vital fluids and electrolytes, leading to dehydration. Dehydration is known to cause changes in mental states, and this is backed up by research showing even mild dehydration can lead to physical or emotional pain.

Alcohol use disorder, or alcohol consumption in general, is strongly associated with poor sleep outcomes. Many people struggle with sleep, and even small amounts of alcohol use has been found to negatively affect sleep quality.

Sleep quality and sleep deprivation is widely recognized as associated with anxiety, and if you are waking up with anxious thoughts, it is recommended to avoid drinking altogether. Generally speaking, to effectively deal with hangxiety, it is best to stop frequently drinking alcohol or limit it to one alcoholic drink.

Ethanol (aka alcohol) is metabolized by the alcohol dehydrogenase enzymes. How well an individual processes alcoholic drinks is largely dependent on their genetic makeup. A significant body of research is now showing that specific genetic mutations (single nucleotide polymorphisms within the alcohol dehydrogenase genes) can influence how an individual responds to alcohol. We all know people struggle to varying degrees after a few drinks, some having trouble regulating anxiety that a hangover creates, and some people have very minimal psychological symptoms.

How to cure hangxiety 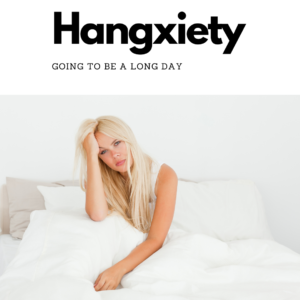 A ounce of prevention is worth a pound of cure. Regulating your drinking habits is the best way to not have hangxiety, but this is not always a reasonable approach. Since dealing with hangovers involve increased effort in the morning after a night of drinking alcohol, here are some easy interventions you can do:

You may experience anxiety from a hangover due to fluid loss, so its important to replace those fluids and electrolytes lost during alcohol metabolism. Sports drinks or other fluids that are high in electrolytes may help in decreasing hangxiety symptoms.

Alcohol consumption before bed can lead to poor sleep hygene, and is associated with how hangovers influence executive functions. If you are already experiencing hangxiety, it may be difficult to manage daily tasks, but you can still get a good nights sleep the day after!

If falling asleep is difficult when you experience anxiety, try a Natural Dos CBDA gummy to help calm the nerves and relax into your daily life.

Anxious thoughts in the morning or the day after with a hangover contribute to mood changes, and ruin your plans for socializing. Many people report that hemp derived cannabinoids, such as CBDA oil, can help calm the mind and induce relaxation. Try out refreshing CBDA Mint tinctures in your morning routine if you struggle with hangxiety.

Non-steroidal anti inflammatory drugs are a classic go to for helping people cope with hangovers. The most commonly known one is ibuprofen, which selectively targets the COX-2 enzyme responsible for inflammation and pain. Recently, it was found that CBDA targets COX-2 as well, and may provide similar effects.

Important: it is not recommended to take acetaminophen for hangovers since it can cause liver damage in some cases where people have consumed a significant number of alcoholic drinks.

Breathing exercises have started to gain popularity within the medical community as a method to decrease anxiety and anxious thoughts. We recommend this breathing guide from the NHS as an easy method to help reduce the usual physical symptoms of anxiety.

How to prevent hangxiety

Without sounding too obvious, the best way to prevent hangxiety is to not drink alcohol beyond one or two drinks depending on how well you tolerate it.

If you plan on drinking more than usual, here are a few items that may help to prevent hangxiety the following day:

Dont drink on an empty stomach

The research on alcohol metabolism when imbibing during after eating or on an empty stomach is somewhat controversial. There are multiple studies showing that it can be beneficial at decreasing blood alcohol levels, and improve the the metabolism rate of ethanol, thus clearing it faster. While this is now considered common knowledge, large meta studies have that this advice needs further studies to justify its recommendation.

Many people report that drinking a non-alcoholic drink interspersed with alcoholic beverages stops the dehydration and much of the hangover effects. Staying hydrated is one of the best ways to prevent any other unpleasant hangover symptoms.

NAC has been well studied for its antioxidant properties, specifically, its high absorption, and the body’s ability to transform it into glutathione, the primary antioxidant used in all cells. Alcohol can cause cellular damage in a lot of different organs, primarily through the production of free radicals and the subsequent cellular damage that occurs when it overpowers the cells ability to handle the stress. There are limited studies of NAC and hangovers, although a recent report found that NAC supplementation (around 1g) prior to drinking decreased hangover effects in female subjects. At the very least, there is a wide body of pre-clinical research indicating that it can help prevent damage from alcohol induced liver toxicity.

Drinking alcohol in excess can lead to hangxiety, and other forms of physical hangover symptoms. If you find that drinking is constantly leading to anxious thoughts the morning after, try some of these interventions and see what works best for you. Alcohol use disorder can be serious, and consultation with a medical professional should be sought if you think it may be leading to negative life events.

How many cannabinoids are in the cannabis plant? 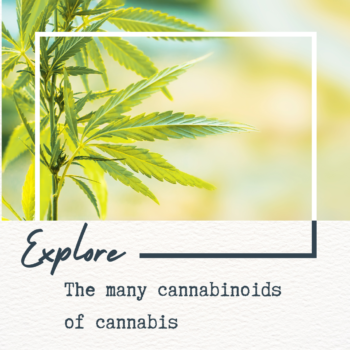 CBDA Sleep - What acidic cannabinoids can do for sleep 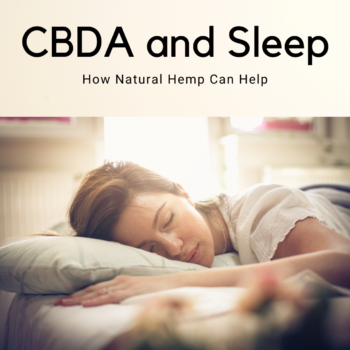