CBDA and CBGA – COVID19 and Beyond

CBDA and CBGA – COVID19 and Beyond

CBDA and CBGA – COVID 19 and Beyond

CBDA and CBGA have been in the news lately due to a recent study showing that they can inhibit binding of the COVID-19 virus to epithelial cells. These are not common cannabinoids found on the market, so what are they?

You have probably seen CBD oil all over the market, and while CBD from a high quality company and at the right dose can be beneficial, not all hemp oil is created the same. Acidic cannabinoids are becoming more popular as new researchers found that they may have novel therapeutic benefits over CBD and CBG.

What is CBDA and CBGA?

The cannabis plant, which can be another term for hemp plants, contains primarily acidic cannabinoids when it is still in the field. These acidic cannabinoids, such as CBDA and CBGA, are the natural form of cannabinoids before they are processed. Because traditional purification processes use heat to separate cannabinoids from other plant material, they lose the acidic state and convert to their decarboxylated forms.

Both CBDA and CBGA are non psychoactive compounds, similar to CBD oil or CBG.

Because acidic cannabinoids, such as cannabidiolic acid and cannabigerolic acid, are associated with the natural state of the hemp flower, there numerous terms used to refer to extracts that contain them:

How are CBDA and CBGA formed?

During conventional purification processes that use heat, the CBDA and CBGA get converted to CBD and CBG respectively in a reaction termed decarboxylation. See figure below:

How CBDA and CBGA are made in the hemp plant

This process also occurs when you smoke flower from hemp plants or marijuana plants, since the heat converts the acidic cannabinoids to their decarboxylated forms (CBDA to CBD, or THCA to THC).

CBDA and CBGA are not the only cannabinoids in the living plant, there are many other minor cannabinoids that are present as well. These include:

These various cannabinoids as well as other cannabis compounds may have important health benefits not yet discovered.

Both CBDA and CBGA recently became popular due to some studies that reported that they could interfere with COVID-19 viral type binding and replication processes. One of the earlier studies found that using multiple live Sars cov 2 variants could be inhibited from cell entry via spike protein by exposure to CBDA and CBGA. The binding study found that CBDA was modestly more effective than CBGA, but both cannabinoids needed to be in the low microgram per mL (ug/mL) concentration range.

A second study assessed the ability of CBDA and CBGA to inhibit a critical sars cov 2 protease enzyme. They found that both CBDA and CBGA could inhibit protease activity, with CBGA having the highest efficacy.

A note of caution on the CBDA and CBGA dosage. The studies that found inhibition of sars cov 2 required a concentration that would be difficult to reach.

How do we go about breaking down the theoretical dose a person would need to take to reach similar therapeutic benefits as seen in the cell culture studies? A recent study found that taking a full spectrum extract that contained acidic cannabinoids (sometimes termed “raw form”) could yield exceptionally high CBDA levels in the blood.

Because each cannabinoid has different bioavailability (how well it is absorbed by the body), we can calculate an approximation of blood concentrations based on the amount a person takes.

Using the pharmacokinetics of acidic cannabinoids of this study, we determined the theoretical blood concentrations based on a similar compound to weight dose:

For the mathematically inclined, we derived an average blood CBDA and CBGA exposure (really a plasma analysis) based on the 4 hour log-linear AUC (C-avg = AUC/t-min).

As a frame of reference, these are very high concentrations, typically a drug is considered to have good effects if its in the low nanogram per milliliter range. See our post on CBDA dosage for a more complete analysis.

How does the amount of hemp compounds taken and resulting blood concentration relate to the viral binding studies? Based on the sars cov 2 binding study a concentration in the low to mid microgram per milliliter level is required to have a significant impact.

Below is a diagram of the theoretical amount of CBDA and CBGA needed to reach a blood concentration similar to what was found to be effective in the cell culture study:

As you can see, despite CBDA and CBGA having very high absorption rates compared to CBD or CBG, you would still need to take a significant dose to reach the same concentrations as found in the COVid-19 cannabinoid binding study.

Conclusions on hemp extracts and COVID-19

While there may be benefits to cannabis products for COVID-19 outside of preventing viral binding, the research is still in the very early stages. Currently, we do not know the side effects of taking raw cannabinoids, such as cannabidiolic acid, at high amounts.

Note, the FDA has not approved cannabis products for use in COVID-19 related therapeutics.

The data on CBDAs and CBGAs is very promising. They are known to have similar properties but also work differently than CBD and CBG. Also like CBD, CBDA remains non-intoxicating. Like CBD cannabinoids, cannabinoids also interact with the endocannabinoid system.

What does the research say?

There are numerous studies on therapeutic benefits of CBDA and CBGA in preclinical models. However, since these are new hemp compounds, there is limited data on their efficacy outside these studies.

Beneficial effects of CBDA and nausea are one of the more robust outcomes reported by researchers. This early research from 2013 in musk shrews found that low doses of CBDA administered through intraperitoneal injection drastically reduced nausea symptoms.

A follow up study on anticipatory nausea also found that low dose CBDA from the cannabis plant decreased nausea. This reduction in nausea was determined to be from interactions with 5HT1A serotonin receptors, a known target for SSRI (selective serotonin reuptake inhibitor) drugs.

A number of preclinical studies using cannabidiolic acid (CBDA) have found that it has potent anti-inflammatory properties. In a breast cancer cell model, CBDA was found to inhibit the activity of the pro-inflammatory enzyme COX-2 (cyclooxygenase 2). COX2 enzyme is an important enzyme involved in inflammation, and many other drugs such as ibuprofen target it.

CBDA in addition to affecting COX-2 activity, can also decrease COX-2 expression (production of the enzyme) in similar breast cancer cells. This appears to be through inhibition of PPAR-beta, which was found to be needed for COX-2 production.

Cannabidiolic acid (CBDA) has started to gain recognition as one of the important compounds in cannabis sativa, so research is still in the early results phase. Much of the preclinical anxiety research on CBDA focuses on its ability to activate the 5HT1A receptor, which was found to be needed to reduce anxiety in rat models.

For a more comprehensive overview of CBDA and anxiety, see our post on this subject.

Some of the other health benefits from all cannabinoids may be from their antioxidant processes. Early research has found that CBGA and CBDA have antioxidant properties potentially greater than vitamin E. This study was using cannabinoids to test their ability to scavenge free radicals and prevent oxidation of natural compounds.

Cannabis sativa extracts that contained enriched fractions of CBDA or CBGA were able to inhibit aldose reductase, a critical metabolic enzyme involved in diabetes. This enzyme has a long history or being an important driver in many of the complications from high blood sugar content.

CBD products are the most popular non psychoactive compound derived from hemp extracts. However, early research into CBGA and CBDA has shown promise for many other health benefits as well. While many of these studies are limited to human cells and animal models, future clinical trials and consumer reports may find that the benefits of CBDA are greater than traditional CBD products.

Raw cannabinoids can have significant effects on the endocannabinoid system, and may also play important roles for the immune system as well. The cannabis plant is ready to undergo the next evolution through the benefits of CBDA.

Let us know if you would like to see any specific articles on these two cannabinoids or similar compounds. 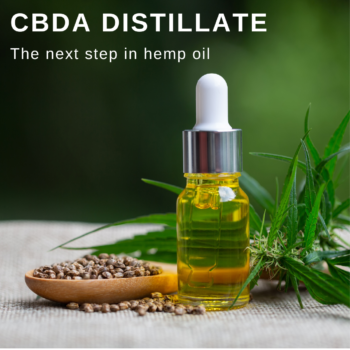